It’s been a while since I’ve logged on here and written something. While there are a few honest excuses I could throw out there (uni has been intense, I’ve felt a little uninspired, I even forgot my password for a while there), the true reason is that I’ve become deeply burnt out on social media.

In my undergrad, I majored in Media and Communications and now I’m doing my master’s degree in Publishing and Communications. Obviously, this entails being constantly plugged in and logged on. Most of the time, I love it. I haven’t yet met a postgrad subject I don’t like and the thought of class and assignments gets me excited. But at the same time, I had no idea the mental and emotional toll my constant social media use was taking. It took me until it came to a head in an explosive argument with someone I love to realise that I was in too deep.

While I’m certain that I’m not the only person who’s experienced personal issues caused by social media, I still couldn’t believe that I had let something so seemingly trivial come between me and a loved one. I’ve never been that person before, and not once before did I stop to self-reflect and consider that I was becoming someone I didn’t necessarily like.

Social media was causing me to excessively compare myself to others, and as a result my self confidence plummeted. I became obsessed with people I’d never met who are leading what seem like perfect lives and I began to question everything I’ve accomplished (or, more accurately, everything I haven’t). Instead of unfollowing accounts that made me feel bad, I somehow got sucked into a void of self-loathing and followed more and more of those accounts. I couldn’t pull myself out of this hellscape of people with perfect bodies and families and jobs and houses. I was finding validation from likes and comments from people I barely knew or didn’t know at all. I was taking everything personally and my mental health was suffering because of it.

After a whole undergrad degree plus a little bit of a postgrad degree, suffice it to say that I know a lot about social media and how it works. I know that everything on there is carefully curated to convey a very intentional, specific message. I know that people show a highlights reel rather than a BTS look at their lives. I know that you can create an entire life that isn’t real on social media. I know all of this. But it’s so easy to forget all of that and get sucked in.

But the solution isn’t necessarily to use social media less; it’s to use social media right. Deleting all my social media and pulling a Carrie Bradshaw Throwing Her Phone Into The Ocean move isn’t really an option in my field of study. So I’ve had to set some rules for myself to keep my emotional and mental wellbeing intact:

Social media is a very weird phenomenon that we’ve invented for ourselves and it’s up to us to make sure we’re using it consciously and responsibly. I firmly believe that humans were not created to comprehend the reality that social media presents. We have constant access to news (most of which is bad news); anyone, anywhere, at any time is able to tell us exactly what they think of us with almost no repercussions; we can see highlights from everyone’s lives, but we see the gritty realities of very few of them.

We forget that social media isn’t real life and we treat it as though it’s the ONLY life. It’s imperative for your mental health and emotional wellbeing that you’re kind to yourself on social media and prioritise your state of mind above how you’ve been conditioned to act. Safe scrolling, kiddies! 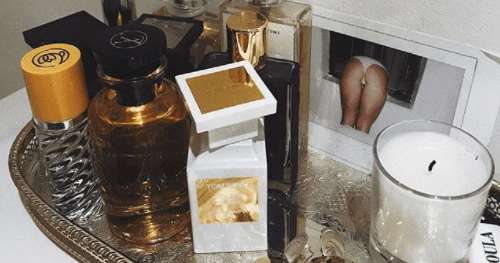 As a whole, Instagram is basically a booty-shot, fitness-model-filled, selfie-laden hellscape. And look, maybe you’re on there for the booty shots and heavily edited selfies and videos of fitness models yelling protein ball recipes at you. No judgment. But personally, I like my homepage to be filled with fashion weeks and runway shows and Maria Grazia Chiuri’s latest creative genius. So if you’re looking to add a little fashion to your feed, take some inspiration from this list* of my favourite fashion Instagram accounts.

*Watch this space for updates 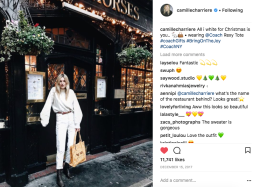 Camille Charrière is easily my favourite fashion influencer. She’s a Paris-born, London-based freelance fashion journalist and full time fashion goddess. I’m absolutely obsessed with her cool-girl casual style and how she makes every outfit look utterly effortless—so obsessed, in fact, that I wrote an entire essay about her as a journalist and a microceleb. Her closet is universal and stylish, but made unique by key statement pieces like an acne fuzzy jacket, checkered wide-leg trousers, or a mustard velvet suit jacket. 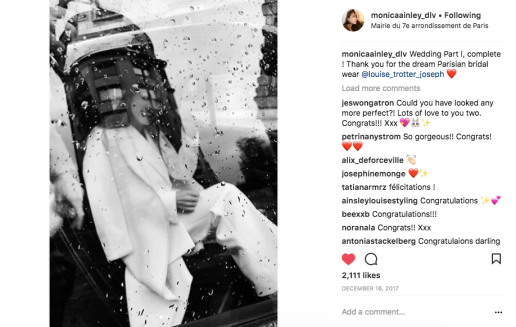 If you’ve followed Camille Charrière, you’ll inevitably run into Monica Ainley’s account sooner or later. She’s a fashion writer and co-hosts the Fashion No Filter podcast with Camille (which I listen to religiously, obviously). I’ve loved loved loved Monica’s timeless style since the day I hit the follow button, but the look that sealed the deal for me was her wedding outfit: a white tailored suit by Joseph. A suit! For her wedding! I have an embarrassingly huge girl crush.

Signature style: a mum from the 1980s. But not a regular mum. A cool mum. Who wears a pantsuit to her own wedding. 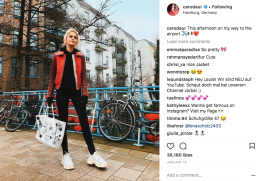 So basically, I don’t understand 95% of what Caroline Daur is saying in her Instagram stories since she speaks a German-English hybrid, but I watch them on repeat anyway because I don’t want to miss out on one of her killer outfits. She’s a fashion/beauty/fitness/travel/lifestyle/food blogger, i.e. a modern Renaissance woman and everything I aspire to be.

Alex Badia is the Style Director of Women’s Wear Daily and his Instagram is my go-to for fashion news (after, like, Business of Fashion, obviously). His feed is chock full of front-row views of runway shows, updates from fashion weeks, and street style shots. Plus, his own style is A+.